by Leonie Wahl and Robert Fleischanderl

A woman with no words left, exhausted, only knowing she is herself.

A piece about the meaninglessness after having lost everything.

A piece about solitude. A search for lost identity.

Was it illness, social circumstances, depression, flight, crime? We won’t get to know.

Spit into the empty space. Who is a naked body without history, without roots? A woman who gave up. She might never dance again. A woman in the void has to learn living again.

What is left of a human being when everything is lost? When the only thing you still own is your naked body? Urgent questions in times like these. Locked into a transparent cube without exit the quest for the lost identity starts.

Leonie Wahl and Robert Fleischanderl tell a story of human existence in an extreme situation using the means of body and visuals. It is about defining boundaries of individual freedom, about utopian concepts and disillusion.

A nacked creature, isolated from her origins, finds herself in a limited space. In a place with few resources she struggles through the human memory, learns the limitations of emotion and physicality. An artificially produced identity is assigned to her: the identity of the stranger, thrown together from reflected fears of others. She is a projection of evil, dangerous and threatening. Separated from her own kind, but who are her peers? The creature commits herself to a rocky way, with resistances and residues of humanity. She lives with what is given, invents her own strategies, recycles memories, feelings and thoughts. She is like the others in the brutality of instincts, she comes under the wheels and still plays like a child. She laughs, mourns, terrified, afraid, experiences sensuality, sweats, sits down and protests…..
Concept/ choreography/ dance: Leonie Wahl 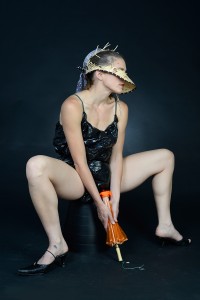